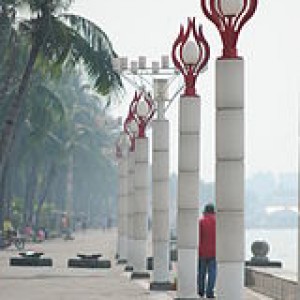 You are a sea lover should not miss the adventure on the seafront of Manila. While in Manila you will not find white sandy beaches, you can visit the beautiful island of exotic and historic as Corregidor Island or if you’re lazy remotely adventurous, try just relax in Manila Bay while tasting available culinary street.

Corregidor Island is a small island that became a historic place during World War took place. The island are tadpole and a silent witness to a fierce battle between the allies against the Japanese. The island is like an outdoor museum that holds many forts and arsenals remainder of World War II. Now the island is a tourist destination that many interesting enthusiasm of local and foreign tourists. Travel to this island has been well coordinated into tour packages by travel agents called San Cruises.

How go to Corregidor Island? You can buy tickets over the counter contained in the CCP Terminal Manila Bay or book tickets online via the Corregidor Island official website at corregidorphilippines.com. to be able to book tickets online, you need to have a credit card. Day trip package ticket includes buffet lunch just for 1999 pesos. Ferry will depart at 08.00 and back to Manila at around 15:45.

After visiting Corregidor Island. You can fill the agenda with a leisurely walk along the Yatch Club and the Manila Bay. Usually on Sunday morning, Manila Bay widely used for sports activities. There are some people who are invisible rowing exercise led by an instructor paddles. Participants of this activity is usually resident who enjoys paddling around. In addition to rowing, many people who spend time with fishing. Lots of anglers who crowded around Manila Bay Yatch Club this. near the ferry terminal there are a lot of people doing aerobics. Foot past the Manila Bay, you will see a lot of Filipinos who do sports activities, running, biking, and others. Manila Bay has a length of about 2 km which stretches from the CCP to the U.S. Embassy.

In addition found many sports activities in the morning, many street vendors selling breakfast, such as bread, corn on the cob, and porridge, you can taste the Philippines corn cob by only paying 10 pesos.

Manila Bay in the afternoon is very good as a place to hone your photographic skills. Sunset view was blocked by a fishing boat can be incredibly exciting to be of high artistic value immortalized photograph. You will find many expedition ships from various countries.