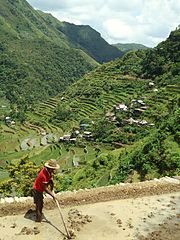 Batad is not a very traditional rural villages. Batad been touched by foreign influences. Almost the entire house has been getting a good flow of electricity generators mini. Housing is composed of many building materials of modern materials, such as bricks for walls, cement to build the foundation, and zinc for the roofs of houses. However, the main livelihood of the population still Batad as farmers. To maintain their culture, tourists often do not see Batad custom homes built around the main house, like a hut.

Batad traditional conical houses, with thatched roofs and have a ladder to get into. In some pillars there is a round wooden slabs located above part before touching the bottom of the rafters of the house. The function of this buffer is to avoid rodents who tried to climb through the poles. Under the house usually serves as a kitchen, a place for cooking rice and food. At this stage in the house there are several compartments, such compartments to store supplies of grain, for storing utensils, and a place to sleep.

Because now the modern times, the custom house is equipped with a simple mattress that can be used by tourists who want to experience sleeping in this traditional home. Another unique thing that is contained in this house is you can find some skull and bone game animals tucked in the roof of the inside of this house. such as pig skulls, bats, buffalo bone, and the other serves as a talisman for this house.